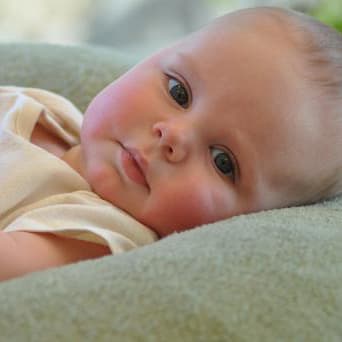 My husband and I had been trying to conceive for more than a year when a friend recommended that we contact Dr. Donesky at the Fertility Center. I have always been an “all natural” person, but considering that we wanted several children, that my periods were infrequent, that my friend suggested it might be something really simple, and that I was already in my 30s, we decided to make an appointment. After a PCOS diagnosis, a few months of Clomid (with no ovulation at all) and more months of Follistim (with too much ovulation), we were candidates for IVF.

To be honest, if I had known at the beginning that we would end up doing IVF, I would never have called, but since we’d been through so much already, we decided to go ahead. Our second implant gave a successful pregnancy. My “all natural” streak kicked in, and I opted for an unmedicated birth. Our precious baby boy was born healthy and has breastfed solely for the first six months and is just now beginning on organic brown rice cereal. It’s hard to believe that this perfect baby was a frozen embryo for a few months. My friends would never believe that the “all natural” me would ever do IVF, but I am so thankful each morning as I pick up my precious boy and thank the Lord for the work of Dr. Donesky and the Fertility Center.