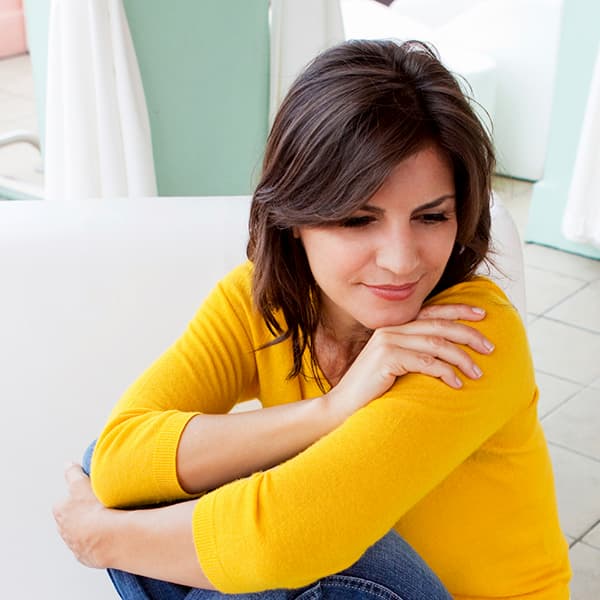 How Hormone Replacement Therapy Gave Me My Life Back

As long as I can remember, I’ve always had a bit of anxiety. But my real journey with anxiety started about six years ago when we moved into a new house.  This should have been a happy experience for my family, but instead, I had a complete emotional breakdown. The anxiety was overwhelming.  I couldn’t sleep, I couldn’t eat, I lost over 15lbs in 2 weeks. I would just sit for hours, trying to keep it together only to end up falling apart. There was no joy, only fear and pain. And I wasn’t the only one suffering. My husband and my two young children watched my struggle. I knew I had to do something, and fast.

Starting with a Psychiatrist

It took me some time to get in to see a psychiatrist but I was finally able to get an appointment.  We discussed what was happening with me and he immediately started me on an antidepressant and anti-anxiety medication. He also made an appointment for me to meet with a therapist. I went home and started my treatment, hoping things would improve. And they did, at least for a little while.

Therapy was helpful and my psychiatrist was determined to do everything he could to help me resolve my anxiety. I had periods of time, up to three or four months, when I felt okay but inevitably, those good times would come to an abrupt end. The triggers were always such little things, like talking about getting a new pet or simply moving some furniture around. But it would send me into a tailspin. The anxiety would come rushing back over me like a wave and I was drowning in it. I would rush back to my doctor, who would add a new medication or increase an old medication. I would see my therapist as soon as possible and try to talk things out. And again, it would get better for a while, then worse, then better…and so on and so on. This went on for several years and I tried to accept that this was going to be my life from now on.

If you’ve never experienced anxiety, it’s a difficult thing to explain. It’s not the same as a simple fear. It’s all of the physical sensations that occur when you are in a total state of panic, as if you knew there was a stranger behind you about to pounce. Your heart races. You begin to sweat. You feel dizzy. Part of you wants to fight and part of you wants to run away. You get a rush of pure terror over your body. It’s all of that, but with no cause. I don’t think the mind can handle all of those physical sensations without a definitive cause, which just makes it get worse. You attach your fear to insignificant things in the hopes that it will make it all go away, but it never does. Now imagine it lasting for days, even weeks at a time, with very little relief. THAT is anxiety. And THAT is my greatest fear. The thought of living my life like that sent me into an even deeper anxiety.

It was at this point, after trying everything else, that my psychiatrist decided to try a new medication. This was a much more potent drug usually meant to treat people with bipolar disorder or even schizophrenia, but nothing else was working and he desperately wanted to help me. I think he thought if he couldn’t fix the anxiety, at least he could stop me from feeling it. And it worked. I didn’t feel the anxiety. Of course, I didn’t feel anything else either. I stayed on it for a couple of months and was doing okay (if going through life with no emotions or feelings is okay). Then I started to have some nasty side effects and had to go off of it. My body was used to being sedated for so long that it didn’t take well to removing the sedation. All of the anxiety came rushing back, and this time it brought a friend with it… depression.

Until this point, depression wasn’t an issue for me. But now, all I felt was fear and sorrow. Admittedly, I had days when I wished I could end it all. Thank God I had my family there. Without them, I hate to think how bad things could have gotten for me. The depression and anxiety lasted for months. My doctor tried everything. I was taking several pills a day just trying to get back to a functional place in my life, but nothing worked. I was long past the point of feeling hopeless. Little did I know that my life was about to change.

My husband and I were talking to a family member and the topic of my current state came up. He’s a doctor and said he’s seen things like that before. He asked if I’d ever considered hormone replacement therapy. Replacing Hormones?  I was 38 years old. Stuff like that doesn’t happen to women my age, right? He suggested that I make an appointment with an endocrinologist and I agreed to try it. I was desperate and willing to try anything. I spoke to my husband and we agreed that I should see Dr. Bird. I called the next day and made my appointment.

Going to see Dr. Bird is different from other doctors I’ve seen. I’m used to sitting in an examination room and being asked a series of questions off a clipboard. But when I see Dr. Bird, I meet with him in his office and we have an open discussion about what’s happening with me. It’s a very give and take conversation and he really listens to what I have to say. At our first meeting, we went over all of my symptoms and issues over the past several years and he explained just how much of an impact hormones can have on one’s emotions. I had some bloodwork done and he started me on a low dose of hormone cream, primarily testosterone. I left his office feeling hopeful, but still wary of getting too excited. I picked up my cream from the pharmacy and started using it the next morning.

Getting My Life Back

This is where things get exciting. Two days into using the hormone replacement therapy cream, my depression was gone. About five days later, anxiety was gone. Not better… not improved… GONE. I felt amazing! After years of thinking my life was never going to be happy again, I was happy! I was thrilled!!! It was as if someone turned on the color in my black and white life. The world was beautiful! It was wonderful! I had energy. I felt joy! I wanted to do everything I’d missed for the last few years. I couldn’t get enough of my family. Life was amazing!

Then, the most incredible thing happened. About three months after starting this new treatment, everything went wrong. I won’t get into all of the details, but between a lay-off, financial woes and a bolt of lightning hitting our house, it seemed that we were in for a rough ride. I had moments when the stress was a bit much, but that was it… a bit much. I held on and rode out the storm until it passed. I kept waiting for the moment when my anxiety would return and rear its ugly head, but it never did. Life went on. We made it through that tough time and things improved again. I never crashed. I never fell apart. There were no breakdowns or panic attacks. I survived it. I was proud of myself. I felt fabulous!

And the best part? That was over a year and a half ago, and I still feel just as wonderful today as I did then. I meet regularly with Dr. Bird to discuss my progress and to have bloodwork done. And I’m doing great! I’m doing better than great! I never thought I’d experience life without anxiety, but I am and it’s the most fantastic feeling in the world!

I have moments when I think it would have been nice to know all of this so many years ago when my journey started, but going through all that I did and learning about such an effective treatment for women like me has made me aware of a problem that so many others face. A lot of mainstream physicians aren’t familiar with hormones and just how much they affect the human psyche. I now use every opportunity I can to share my story in the hopes that maybe the next person won’t have to struggle the way I did. I thank God every day for guiding me to Dr. Bird. Because of him, my husband has his wife back, my children have their mother back, and I have my life back. Thank you just isn’t enough.