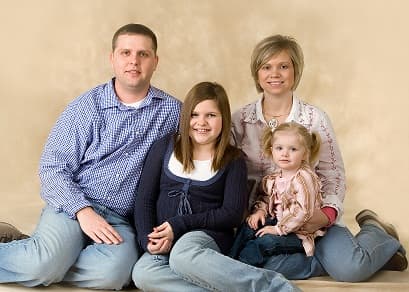 We are so excited to be able to share with you the journey of how we achieved our little miracle. It all started in 2003 when we decided we really wanted to have a child together. (Jamie had undergone a tubal ligation in 1996 after her daughter was born.) We knew the first step was a tubal reversal. Then after a year of trying to conceive on our own, we decided to seek fertility help. Success didn’t happen for us overnight, but Dr. Donesky was wonderful throughout the process. Finally after two artificial insemination cycles, two surgeries, a miscarriage at seven weeks, and four in vitro cycles, we were blessed with a beautiful baby girl born in January of 2006.

For those of you who dream of becoming parents but have many doubts of it actually happening, just be patient and don’t ever give up. We’ve been there and did everything possible but never lost hope and now we realize that we would do it all over again for AnaGrace.

She is so special that we felt we should give her a special name. She is named after both of grandmothers as well as Grace Baptist Church where we spent our Sundays praying so hard for her. So to Dr. Donesky and all of the Fertility Center, we would like to say THANK YOU! We couldn’t have done it without you, and we hope to see you all again soon. Pictured also is AnaGrace’s big sister, Keyle.